Yantra is a Sanskrit word, which literally means loom, instrument or machine. In other words, a Yantra is a geometrical representation of corresponding Mantra, created by interlocking several geometric shapes such as circles, triangles and floral patterns which helps us to resonate positive energy, disperse negative energy and to elevate one’s spirituality. Yantras function as revelatory symbols of cosmic truths. A Yantra and a Mantra, both are instruments used to induce a specific resonance in which the first one is for the visual sense and later for the auditive sense. Each Yantras are often focused on a specific deity, and so by tuning into a Yantra one can tap into corresponding deity or creative force centers in the universe.

Occult Yantras functions as aids to or chief instruments of meditative discipline. They are an mixture of three important principles: the form (Akriti-rupa) principle, the function (Kriya-rupa)  principle and the power (Shakthi-rupa) principle. Akriti-rupa refers to the inner or hidden form of structures which means that everything have a gross structure and a ‘subtle’ inner structure, with a basic causal pattern (the inner form) for the external form. The fundemental shapes coupled in creating a Yantra are psychological representations which correspond to the various phases of inner consciousness along which the control and the expansion of psychic forces are probable. This is why a Yantra is said to embody the Function principle. By constant worship or meditation, the Yantra is said to move beyond ‘form’ and ‘function’ and emerges as a ‘power diagram’ (Sakti-rupa) endowed with a self-generating propensity to transform a spiritual experience into a psychic one. It’s here where the Yantra is said to be ‘revealed’.

All graphic shapes used in a Yantra corresponds to the psychological schema. The outer gates, the lotus petal, the inner geometric shapes and the bindu resembles the gates of one’s consciousness, the spiritual enfoldment, the stages of spiritual ascent and one’s innermost self respectively. They are considered to reveal the inner basis of the forms and shapes flourished in the universe. Just as, whatever the outer structure, all matter is made of an essential basic component, the atom, so each and every aspect of the world can be seen in its structural form like a Yantra.

Most Yantras are surrounded by a square (bhupur) with four gates. These square enact the material world while the gate enacts the access into the Yantra. The different shapes, symbols, numbers inscribed inside are like the parts of a mechanism which guide us gradually towards its center, the Supreme Consciousness. A Yantra is thus an instrument that allows us to make an inner journey to identify the supreme self.

The Various Shapes of a Yantra

A Yantra consist of a geometrical pattern made of several concentric figures such as circles, squares, lotuses, triangles, points etc. Each and every shape of a Yantra emits a very specific, beneficial and harmonious energy pattern that is used in meditation. All these represents the cosmic energies. It is believed that these concentric figures gradually grow away from the center signifying the process of macrocosmic evolution.

How are Yantras created?

Yantras are created by the amalgamation of various geometric forms and patterns that teach the mind the power of concentration and focus. The drawing of a Yantra needs accuracy, discipline, concentration, neatness and precision. It should be created by a Sadhak with proper instructions from his Guru and the blessings of Upasana Murthi (the deity who he meditates on). They are created under definite rules and with specific rituals on specific divisions of time in a particular place using certain objects, symbols, sounds, names and forms & energized through a ‘Sidh mantra’ with utmost skill and earnestness, a process which invoke the power of a deity for any of the purposes such as create, uphold, conceal, manifest or destroy.

An elaborate ritual called “Prana Pratishta” is enacted to infuse the deity into the Yantra. Mantras, flowers, pranayama practices, incense and herbs are all offered as if the Yantra were a living being. Energizing the Yantras converts them from mere geometric diagrams to a proper vehicle or recepticle through which the contained invisible forces of energy, are invoked or moved to begin working for the benefit of the individual. Yantras once created and energized, automatically open a ‘channel’ of divine energy through the five elements, magnetizing and drawing through itself high divine vibrations.

How do Yantras work?

Yantra are the best alternative of Mantra to gain positive energy and to eliminate the malefic effects of adversely placed planets. Yantra become a solution for those who are unable to chant Mantras with correct pronunciation. When one focuses on a Yantra, his mind is automatically “tuned in” by resonance into the specific energy form of that Yantra. The process of Resonance is then maintained and amplified.

The Yantras create a peculiar but invisible and intangible quality atmosphere which is filled with positivity and positive vibrations, which keep us in contact with spiritual energies that enhance the soul from within. It increases the intensity of prayers and makes the thoughts more strong and influential. The powers of a Yantra focuses on the resonance of cosmic energies. When one focuses at the centre of a Yantra, his/her mind is pitched into the creative force connected with the Yantra used and the energy flows. The wish and intention of prosperity and affluence along with a Yantra, is bound to yield more fruitful results.

Instructions For Wearing and using Yantra 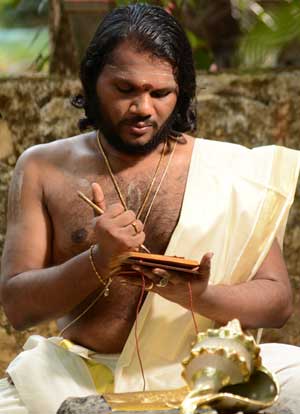 “PRINTED YANTRAS has no power at all”.
“A yantra should be created by a Sadhak with proper instructions from his Guru and the blessings of Upasana Murthi (the deity who he meditates on ). In our lineage we were taught that the drawings in the yantra can be compared to bones in human body- when we write mantras the proper shape forms. With proper chanting, puja, and hawan the yantra takes on its essential qualities of jeeva (life) and prana- thus an energetic Yantra is created. Yantra is combination of Sookshma shareera and Sthoola shareera.
Just imagine, in ” printed” Yantras the machine is the creator. Without an organic method of production how can a truly energized Yantra be created ?” 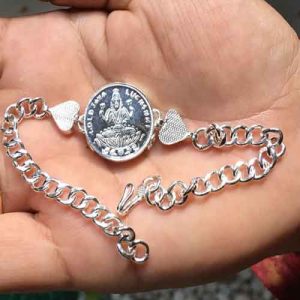 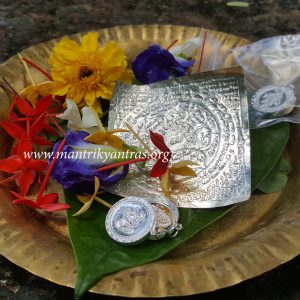 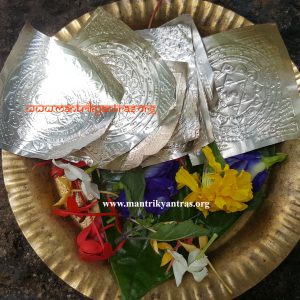 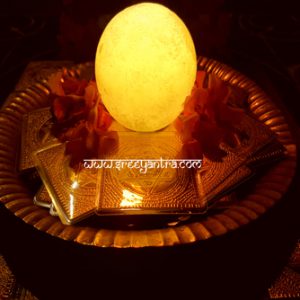