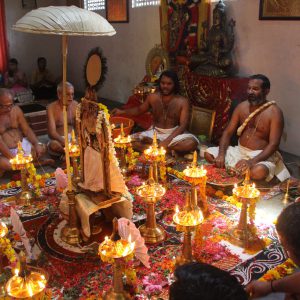 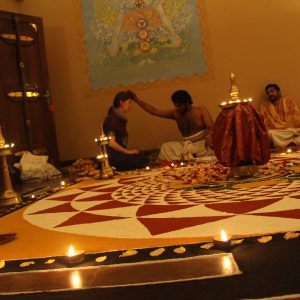 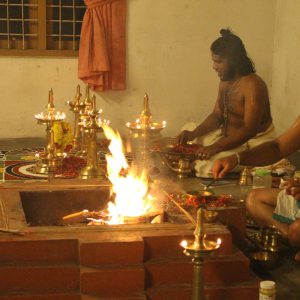 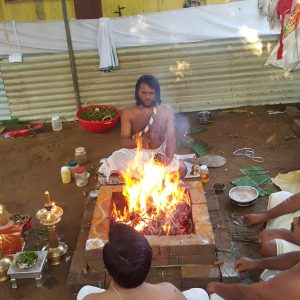 A pooja is a ritual of worship and adoration to the GOD in the tradition of Vedic (Hindu) religion. Hinduism refers to Sanatana or Vaidika Dharma which means eternal principles of life as per the Vedas. One GOD as per the Vedas is the One Supreme Being (Bramhan) ultimately responsible for Generation, Operation and Dissolution of everything. Freedom (Moksha) from bondage and desires is the ultimate aim of Sanatana Dharma. The three paths which are needed to get integrated with Vedic Hindu spiritual approach are devotion, knowledge and action. A pooja even in its simple form is a synthesis of these three paths. A pooja is based on devoted and knowledgeable actions.
A pooja also connects all the senses dealing with sound, touch, sight, taste and smell to sacredness through components such as sculpture or pictures of Gods, chants, prayers, bhajans, flowers, fruits, incense, milk, water etc. A pooja provides a spiritual experience not only to the performer but also to the participants. A pooja also can be seen as a loving act of treating an invited guest to one’s home. As one treats his guest with respect and love by various offerings, similar offerings are made to God during pooja.
A pooja has two main parts namely internal (mental) and external (ritualistic).
The internal (mental) worship is very important after which one begins to perform the external part. In the external worship the various offerings can be classified into several offerings to God, namely, 1) Invoking God into altar through sculpture or picture, 2) A seat, 3) Washing feet, 4) Washing hands, 5) Water for sipping (Achamanam), 6) Sacred bath, 7) Sacred cloth, 8) Sacred thread, 9) Sandal paste, 10) Flowers, 11) Incense sticks, 12) Waving of oil lamp, 13) Food, 14) Betel leaves and coconut, 15) Waving of camphor light, 16) Clockwise circumambulation and Prostration. Each of the above is offered with mantras and prayers in Sanskrit. Also, sounds of bell and conch are used during the pooja. A specific manifestation of the Supreme Being is chosen for the pooja depending on the wish of the congregation or family. Usually a Hindu family maintains an altar or pooja room inside the home as sacred space for performing pooja. In Hindu temples, priests perform poojas.
A pooja at home or temple is a synthesis of devotion, knowledge and action that provides spiritual tranquility by connecting to Omnipresent God. In the words of our guru, “the worship of deities and rituals in a home or a temple should be carried out with child-like loving mind by the devotees as little children play with joy using their toys as medium”. Also, In Bhagavadgita (9-26) Lord Krishna says that “I will accept from them even a leaf or a flower or a fruit or water, when it is offered with love, devotion and purity of heart”.
Homam, Havis, Yajna and Yaga are closely related terms dealing with a sacrificial/sacred act with offering to Gods through the medium of fire (Agni). adiyEn will comment for the record on their individual connotations and
provide additional details on these terms and their Vedic Significance.
YAJNA in its broad sense has been defined as a sacrificial rite or spiritual offering made generally in fire. In Bhagavad Gita, Bhagavan declares that he is of the Japa Yajna among the various Yajnas. Here reference is to the Mantra Japam of one’s Ishta Devata or Upasana Murthy or the Sacred Upadesha Maha mantra.
HOMAM is generally a small scale “Yaga” and is performed at home as opposed to Yagas, which take place in a public place with attendance of a large group of people. Examples of such Homams are the Purusha Sukta Homam and Ganapati Homam. Agni is involved and sacrificial offerings are made to propitiate Gods or the Sacred passages associated with the Vedas or Bhagavan.

Importance of Pooja and Homam Based on Kerala Tradition

Kerala tradition had unique system of pooja and Homam. Its combination of Parasuramakalpa Sutram, Tantra Samuchayam and Padhati by Adi Shankaracharya. Veda and Tantra are combined in Kerala Puja Paddhati known as Vaidikatantram. The perfect combination of mantra, mudra and other rituals are speciality of this tradition. Mantrikam is a unique remedial healing system in kerala tradition. Mantrikam is combination of psychology, ayurveda, tantra mantra and yantra. Purpose of Mantrikam, known as Shadkarma, which is Protection (raksha), Realisation and achievement of aim(karyasadhyam), Destruction (nigraham), Recovery from illness (rogashamanam), Stoppage of certain activity(sthambhanam), Acquirement of something (aakarshanam), get avoiding something (vidveshanam), Driving away of evil forces (uchadanam), get the admiration, attraction, respect, approval etc. of some person(vashyam). Nigraham, Sthambhanam and Vidveshanam are of course negative ends so a noble thantrik practitioner do not involve such remedies, but they can do destruction for evil forces.